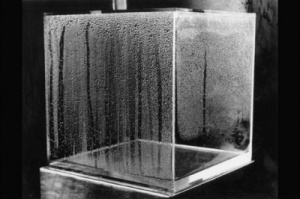 Condensation Cube is not a ‘sculpture’, but a hermetically sealed plexiglass box measuring 30x30x30 cm and containing a shallow, one-centimetre deep pool of water. In 1971 Haacke described condensation as a ‘real-time process’ designed  to relegate the viewer to the passivity of a ‘witness’[*]. He desired a situation in which the insentient ambience of nature’s ineluctable flux reveals citizen x’s Kantian ‘disinterested’ criticality to be nothing other than an interested compact with the ‘cultural frame’ lurking behind the work (which is itself always bracketed). Condensation here functions as a trigger, alerting the witness to the bland fact that her judgments can only slide off the work, which remains as disinterested as the world itself. Haacke targets the way in which citizen x normatively enforces her social capital by ab-using object x, via what Pierre Bourdieu has termed an act of ‘aesthetic distancing’[*]. By outsourcing the living object, citizen x feels herself as really belonging to the institution < I look over your shoulder>. Something, however, feels wrong with this Institutional Critique: it’s too good looking. The problem, as Robert Smithson declared, might be that ‘confined process is no process at all’[*]. This is not to say that Haacke unintentionally intends to sabotage his own critique by adhering to a central Minimalist motif, but that his refusal to acknowledge the iconographical presence of the Cube could be taken, by the selective vision of citizen x, to be a reverse encouragement of a Kantian disinterestedness.

According to Marx, labour is the metabolic process through which ‘man’ is connected to nature. It is only by labouring through the sensuous exterior world that we are able to realise [verwirklicht] our life ‘purpose’. I think, in order to salvage this critique, we must stop and think about what happens to form when it enters the gallery space. If labour is truly a metabolic process, it is also a mode of purposive movement we read into and onto still things. There is real living labour, and then there is labour that we presuppose through a kind of metabolic vertigo: we need labour to exist for things to exist. Function-less form makes no sense to the labouring eye. We depend upon the tactility of hard edges, of rules. As soon as the machine displaced labour’s sweat, and Capitalism supplanted nature as the world’s noise – at least that’s what the noise on the street feels like – our basic metabolism was re-calibrated, I would argue, to occlude labour, and to promote instead frieze-framed representations of one’s lifestyle as the process to which we must succumb in order to make sense of the sensuous exterior world. From the dissolution of the barrier between art and life, this new metabolism has been legislated and furthered by aesthetics and then communications to such an extent, that we now know nothing else: We no longer labour to survive, today we labour to look good. Could it be possible that an upwardly-mobile, interested citizen x might intentionally assume the lackadaisical face of disinterestedness so as to be artfully transmogrified into the object’s laboured nucleus, knowing that the distance between object and body in space instantiated by classical aesthetics diffuses any ethical commitment to labour? It is my claim that Condensation Cube points up a lack of labour that exposes the witness’ metabolic rift. If aesthetically ‘lobotomized’ form acts as a carrier and compensation for our lack of physical labour, then what happens when that form starts to breath and sweat through its own aesthetic confinement? It is precisely because a ‘real-time process’ is launched at the viewer from the seat of aesthetical power – the cube – that it works, because it lures one into a Kantian disinterestedness that is then divested of its ‘neutrality’ and exposed to be nothing other than a bid to get out of work. Here the bourgeoise-homme-citizen is forcibly alienated by nature’s détournement on one of Aesthetics’ most valorised motifs.

It is only once we face up to ourselves as ‘non-beings’, as living lives without agency in the world, that we can start to collectively labour for the greater good of all.